I've always fancied myself as a bit of a chocolatier

My earliest experiments were as a schoolboy and involved Dairy Milk bars melted in foil on top of the radiator (I suspect my tempering technique was a little crude). Then a visiting aunt left me a copy of A Passion for Chocolate Lyon uberchocolatiers Maurice and Jean-Jacques Bernachon, and it was all downhill from there.

I swiftly graduated onto fiendish gateux like L'Aveline (a layered confection of hazelnuts, rum and genoise), and their crowning glory the Fruit d'Automne (chestnut buttercream, coated with chocolate and marizpan and cut to look like ripe chestnuts). I hasten to add that my versions were more like Les Tennis Balls d'Automne than the fancies pictured below: 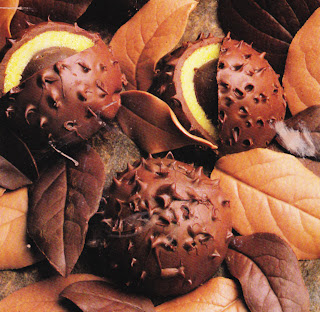 By the time I was at University I had regressed to ganaches and truffles (hint: forget the crap about treating it gently. Use a hand blender to emulsify the b*stards) which featured heavily in my weekly cookery column in the student newspaper (how did you get a weekly cookery column? Easy, get yourself made Editor!).

So its not surprising I have a number of chocolate books in my collection. In addition to the classic Bernachon volume (underrated, and still the source of my go-to recipe for hot chocolate), there are volumes books from all parts of the world. Representing the UK is MPW alumnus Paul Young's Adventures in Chocolate, featuring his award-winning (and slightly over-hyped) sea-salt caramels. From the US Andrew Garrison Shott's Making Artisan Chocolates strikes a good balance between accessibility and cheffiness (you know the drill...Raspberry-Wasabi chocolates and soft-focus photography).

Holding up the Old Europe end is Belgian Jean-Pierre Wybauw's Fine Chocolates, Great Experience (I'm assuming it sounded catchier in the original Dutch) which is my most "pro" volume, featuring mind-bending diagrams of tempering curves and a average water content to three significant figures for every single recipe. He does finish with quite a good looking Nutella recipe though.

I've also had my eye on William Curley's Couture Chocolate for a while, but haven't quite got round to it yet.

But today I want to talk about a book that's slightly close to home, Chantal Coady's Real Chocolate. 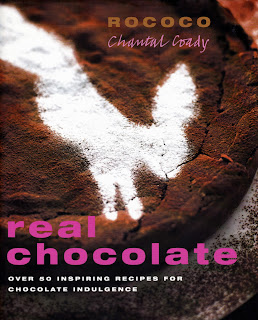 The chocolate scene in the UK before Ms Coady arrived was a dark place. It mainly consisted of either Ferrero Rocher, After Eights or impoverished addicts melting down milky-bars over home-radiators to get their fix.

Ms Coady was a breath of fresh air. She originally set up her Roccoco chocolate shop in the wilds of darkest Chelsea back in 1983, before authoring an excellent pocket-guide to the world's finest chocolate houses. She was particularly notable for pioneering the fashion for weirdly flavoured chocolate bars (cardamon, sea-salt, lemon etc) which are now a staple of major manufacturers. Although no longer as fashionable or cutting edge is modern outfits like Melt or or Artisan du Chocolat, it remains a reliable (if slightly disorganised place to shop).

In terms of its style its most similar to the Paul Young or Garrison Shotts books, i.e. at the accessible end of the range. There are good introductory comments about tasting chocolate and a sensible guide to tempering (although personally I prefer Paul Young's "seeding method" at home, if only because it creates less mess). There are a bunch of recipes for cakes and desserts which are much of a muchness (in particular a baked semifreddo on page 103 which I still struggle to comprehend).

However my interest in the book revolves around two recipes. Water ganache and chocolate duck.


Although Real Chocolate actually has very few recipes for actual chocolates (in contrast to Garrison Shotts and Wybauw which are basically wall-to-wall truffles), it does have one revolutionary recipe. Tucked away on page 32 is her Water Ganache. 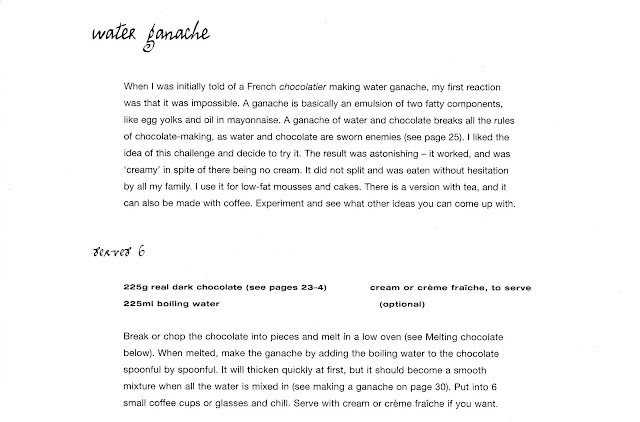 Now Ganache - for the uninitiated - is the basic emulsion of chocolate, cream and (sometimes) butter or eggs which is the foundation of any great chocolate house. Rolled into balls it becomes their plain truffle (the best way to benchmark any chocolatier). Piped into pastry cases it becomes chocolate tart. Tucked between layers of sponge it makes a chocolate gateau into a double-chocolate gateau. It even work at a pinch as a crude frosting, although if you want a mirror glaze best look elsewhere.

But when you prepare Ganache - or any other chocolate preparation - the cardinal rule is to KEEP IT AWAY FROM THE TAP.

Water, or steam in any form is the deadly enemy of chocolate. The merest touch makes melted chocolate "seize" into oily clumps and reducing the strongest of chocolatiers to tears. But that's precisely what Ms Coady does (and water I mean, not make grown men cry).

The origins of the recipe are losts in the mists of time. She claims it came from an unnamed French chocolatier. No matter. It is remarkable either way. She simply melts chocolate and adds boiling water spoonful by spoonful. First it thickens. Then it seizes (as to be expected), but then by some miracle it relaxes to become a smooth Ganache which can then be rolled, spooned or piped as you will.

It probably has some connection with Herve This' famous Chocolate Chantilly, a whipped combination of chocolate and water. But I'll leave the precise science to the experts.

The advantage of this Ganache is two-fold. First its (slightly) less fattening that the classic chocolate-cream mixture. Secondly it lets the chocolate flavour shine through much more cleanly, because there aren't lots of fat molecules getting in the way.

Of course there are downsides. The water can be infused to add secondary flavours (she provides a version using earl grey tea), but it will never carry those as well as the fat molecules in the traditional cream. So if you are making a raspberry-wasabi ganache for some reason, I'd stick to cream. But for a chocolate geek (like me) the alchemy is truly miraculous.

If you want proof of this just look up Damian Allsop, the Robuchon, Ramsay and Can Roca alumnus who has built his reputation around Water-Ganache. Allsop invented the technique independently at much the same time, and has since built a flourishing trade supplying some of Britain's finest restaurants with his infused chocolates.

Surprisingly this technique has had little traction in the US or France (or at least I find little mention of it in other books). But if you are remotely interested in chocolate you should be interested in this.


The proof isn't in the pudding


The second reason Real Chocolate stands out is that is has the most extensive selection of savoury chocolate recipes that I am currently aware of. Every other chocolate book gives you endless cakes, brownies and truffles. But only Chantal gives you a whole chapter on of kidneys, lamb and duck. 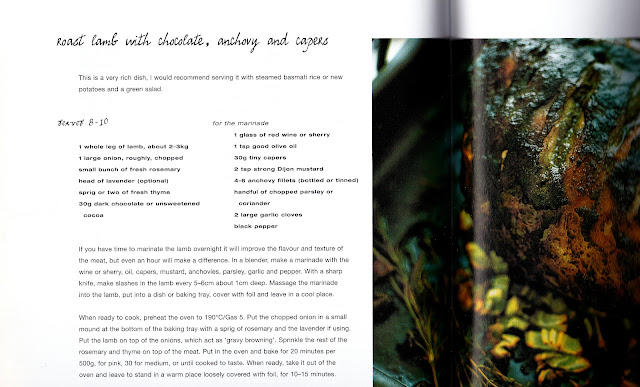 In some ways this is unsurprising, because the use of chocolate in savoury dishes is a well-established practice. Most famous it crops up in the famous Mexican sauce Mole Poblano. Its also commonly used to flavour red-wine sauces for game such as venison or hare (Gordon Ramsay's Passion for Flavour has a lovely recipe for Venison with Chocolate Sauce). Larousse also cites it being used to sauce Aragonese dishes of calf's tongue and langouste.

But I think it needed a real chocolate geek like Chantal to make a chapter of it. Some of the combinations are traditional - used alongside chillis with Mexican refried beans (p81) or in a red-wine sauce to match with hare (p78). But others are more interesting - in particularly its frequently pairing with anchovies and capers, first in a tapenade (p54) and later with a roast leg of lamb (p82). Cocoa nibs are deployed to add crunch to a tempura batter (59), and used to perk up devilled kidneys (p61) There is also a hilarious steamed savoury roly-poly... thing morbidly christened Reverend Mother's Arm (p68 - ah the benefits of a convent education!).


And, as I mentioned at the start, there's a wonderful-sounded recipe of Lacquered Duck in Chocolate Sauce (p75) which is basically a Peking Duck preparation (inflate duck under skin, lacquer with honey syrup before roasting) paired with a sauce containing ginger, cardamon, soy sauce and a whisper of chocolate.

Note a whisper of chocolate. Coady is well aware of the golden rule for savoury chocolate - use it in moderation. Chocolate with meat should always be thought of as a spice rather then as an ingredient. The trick is to add enough so there is a hint of something, but not enough to scream "chocolate".

Now occasionally I grant you Ms Coady lets her imagination run away with her. The words "chocolate" and "sushi" should never be used in the same recipe. Definitely never adjacent (but she does. I won't provide the page number). But on the whole there are more hits than misses.

And how do I know that? Well many years ago I went to Mju (Tetsuya Wakuda's short-lived London outpost) where they were serving a special menu of dishes from this book. And from what recall (this must be a decade ago after all), it was quite, quite delicious: 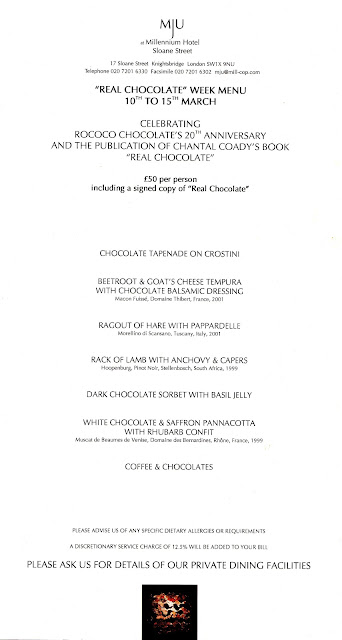