Another instalment in my series on signature dishes, following on from last week's piece on Testuya's Confit Trout. Sticking with the aquatic theme, we have the foie-gras and tuna carpaccio from Le Bernardin in New York.

Le Bernardin's tuna carpaccio (more precisely Thinly Pounded Yellowfin Tuna, Foie Gras and Toasted Baguette, Shaved Chives and Extra Virgin Olive Oil) is easy to describe. A razor-thin shard of baguette is spread with foie gras terrine and laid on the place. A layer of pounded tuna is placed on top. The dish is then seasoned with salt and pepper, brushed with olive oil and sprinkled with shallot and chives.

Originally it started off as a plain seafood carpaccio, created by Le Bernardin's original chef and co-owner Gilbert Le Coze. Long before Nobu and Vong spearheaded the Jap-Asian fusion trend he was served barely or nonly-cooked fish in pristine simplicity. At the time this was a revolutionary as it got.

After Le Coze's untimely passing, Eric Ripert took over the stoves. The Tuna Carpaccio was by now a signature, but after coming across a foie gras & venison version in Sweden Sweden, he made the crucial tweak of adding the fatted liver.

This dish stands out for two reasons. Simplicity and balance.

It's a common misconception that dishes at better restaurants are more complicated.

Often when you try some country-house hotel straining for its first (or even second) star you are deluged with  "Textures of Cauliflower" or "Assiette of Suckling Pig" where there are a dozen things on a plate. This is something I also common New Nordic cuisine where the formula is roughly

Now occasionally this works. Viajante and Texture in London, for example. But these are the exceptions. The math is that more complexity spreads a chef's effort more thinly over multiple preparations.

In reality dishes at better restaurants are often simpler.

I've already written about St John as an example of this ethos. L'Ambroisie in Paris is another shining example - order the chocolate tart and its just a slice of tart, but one amped up to an unbelievable ethereal lightness. The notorious Tourte de Canard is simply a slice of duck pie on a plate. But it's about one of the most technically demanding dishes you can make.

The point is that simplicity is not easy - it's actually much harder.

Le Bernardin are the exponents of this philosophy par excellence. What that blew me away when I ate there was the purity of the cooking, never more than three or four components on a plate. Striped bass was paired with a simple duck consomee. Escolar was almost nude apart from a red-wine sauce. That's bravery - because when there is so little on the plate, there is nowhere for the chef to hide.

The second genius of this dish is its balance. Le Bernardin's owner Maguy Le Coze lays out her philosophy better than I can:


"To really succeed in fish, you need contrast: acidity, spice, texture." That's why every fish dish on the menu will have a balance between crisp and unctuous; exotic spices tempered with a dash of acidity, best seen in dishes like the lobster in grapefruit juice, or even the surf-and-turf, which pairs rich Kobe beef and Escolar with lemon brown butter sauce and spicy kimchi. (p74)

The Tuna Carpaccio is the perfection of this philosophy. Normally you'd think the double fattiness of foie gras with tuna would be too much, but because its so thinly pounded and delicately portioned, the zing of the lemon and shallot stands up to it. The slice of baguette provides that essential crunch and the chives provide a delicate spice.

Figuring out that balance to work is the mark of genius.

The dish is thoroughly documented in Eric Ripert's 2008 book On The Line. First he prepares a foie gras torchon. A whole liver (presumably duck, given the size) is cured for 24 hours with seasoning, wrapped in parchment paper and cheesecloth (a torchon) and then barely poached in chicken stock.

Note that this is barely poached - two minutes and an internal temperature of 90f / 32c is not going to cook the liver (when I make terrine in the oven I generally take it to 58c). The raw liver is just melted together, nothing more (after all its mostly fat). The method here is very similar to the Torchon recipe in the original French Laundry book, which poaches the liver for only 90 seconds. What this method does is gives a richer, butterier result and a higher yield than a standard terrine. In fact its when shaved onto the baguette its pretty much a foie gras carpaccio.

(Also bear in mind a whole foie gras in the recipe will give you much much more than you need for a four-person portion. Make sure you have some extra brioche and fruit chutney to hand!)

The tuna is then pounded thinly between plastic wrap and cut to match the plate. Baguette slices are layered between baking sheets and toasted, and then you're pretty much off to the races!

This recipe should be quite straightforward for the home cook. The only potentially fiddly bit is the torchon - but at least the brief poaching time means you won't have the usual small lake of foie gras fat to deal with. And of course - as with all such recipes - don't even think about this unless you can get the very best possible quality fish. 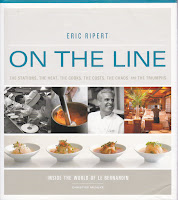 To finish, a few notes about the book itself. As the tagline Inside The World of Le Bernardin suggests, this is one of those fly-on-the-wall books which purport to give a snapshot in the life of a great restaurant (for a similar but vastly inferior example see Phaidon's A Day at El Bulli).

Normally I don't like this sort of book because the pages tend to be filled with cheap reportage, at the expense of recipes and detail (just ask Phaidon). I have to say though that they do a damn good job with this one. I think the reason why is provided in the introduction:


Here's a secret: The lease on Le Bernardin runs out in 2011. I hope we can successfully renegotiate, but the one thing Gilbert didn't leave us is a crystal ball, so we have to prepare. That's why wanted to publish this book, as a stribute to the incredible people who make this one of the best restaurants in New York every meal, every day. (p11)

This urgency is what makes this book feel much more like a labour of love than a PR-puff piece (though happily the lease was renewed).

The first half of the book is a fascinating behind-the-scenes look at how the restaurant works. It's not so much a narrative as a series of magazine features which touch on everything, from how the kitchen is laid out to how the reservation system works.

Although the presentation is inevitably glossy, you don't feel anything is being hidden away. For example it is very honest about how chef de cuisine Chris Muller (not Ripert) is the driving force behind the kitchen. And not only Muller but also the sous-chef and sauce-chef also get full profiles. Co-author Christine Muhlke is making a point here - Le Bernardin is more than just Maguy and Eric.

The recipes which make up the back half of the book are thorough and detailed - they feel like full-fat restaurant versions. In addition to the carpaccio, its generously larded with Ripert's signatures, from the olive-oil poached escolar to the progression of fluke ceviches. Pastry chef Michael Laiskonis also chips in with a number of modern desserts (including a chocolate, caramel and maple egg which has definite echoes of the Arpege Egg).

The best part however isn't the restaurant guff. It's the pen-picture of Justo Thomas, Le Bernardin's fish butcher on pages 58-59. Justo's incredible skill and attention to detail epitomise why Le Bernardin is a special place.

If you want to understand more about Justo (and his restaurant), just read the chapter Anthony Bourdain devotes to him in his 2010 book Medium Raw. It's some of the best writing Bourdain has done since Kitchen Confidential, and I'll leave you in his capable hands:


There are two kinds of salmon to deal with now. One large wild salmon and either thirteen- to fifteen-pound organically farm-raised salmon... With the chef's knife, he cuts from collar down and lifts off the filets... The skins are removed with a few rocking sweeps of the knife.

But most remarkable is what he does with the pin bones. These are the tiny, tricky, nearly invisible little rib bones left in the meat when you take the filets off the fish. They have to be removed individually by yanking the little fuckers out with tweezers or needle-nose pliers, a process that takes most cooks a while. Ordinary mortals have to feel for each slim bone lurking just beneath the surface, carefully not to gouge the delicate flesh.

Justo moves his hand up the filet in a literal flurry of movement; with each bone that comes out, he taps the pliers on the cutting board to release it, then, never stopping, in one continuous motion, repeats repeats repeats. It sounds like a quick, double-time snare drum beat, a staccato tap tap tap tap tap tap, and then... done. A pause of a few seconds as he begins another side of fish. I can barely see his hand move.

I have never seen anything like it in nearly three decades in the restaurant business.